…and that’s exactly what I did.

Along a strip of Southampton that (comparatively speaking) stands the test of time, sits The Rockstone, a boozer that ticks all the boxes – a traditional pub atmosphere, friendly staff, brilliant rotation of craft beers, and the pièce-de-résistance for vegans and omni’s alike – a huge menu that boasts some of the most decadent delights this side of the Solent.

As part of their commitment to providing new and exciting special menus, their Vegan Fortnight, originally introduced as a one-off but repeated again and again due to demand, recently ran to coincide with the beginning of Veganuary. Proving to all that veganism doesn’t have to be boring.

And boring it was not. So much so that on my first visit, I was so dazzled and torn by the great options that I planned to visit a second time before the main course came out. 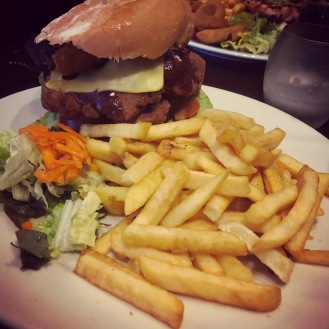 On that first visit I was tempted by the ‘Voyal with Veese’* seitan ‘chicken’ burger, topped with a hash brown. It seems like this is the Marmite of the vegan burger world according to pretty much everyone I asked. Regular meat eaters were a little dismayed at the glutenous texture of the seitan, seasoned vegans reasoned that due to the thickness, the seitan to breadcrumb ratio was off. My opinion is positive, I REALLY liked this burger. I mean, I could barely wrap my mouth around it, it was a nibbler for sure. But it was satisfying to eat, and had a texture that doesn’t appear very often in my regular diet. Also, let me repeat: THIS BURGER COMES TOPPED WITH A HASH BROWN. I feel it can really do no wrong in my eyes.

On my second visit, torn by the ‘Steve MacQueen & Chz’ and the ‘SriraCha Cha Slide’, I let my hunger from a day of fasting in preparation get the better of me and opted for the former, which – you guessed it – came with a healthy portion of mac cheeze on top of a sweet potato & bean burger. Whilst this burger initially seemed lack-lustre after the joy of the seitan, it was actually flippin’ delicious, and boasted all the glorious individual flavours from the sum of its parts.

If you’re unfamiliar with The Rockstone’s portions, they are plentiful. Whilst costing slightly more than your average beer and a burger, you will be hard pressed to find a better burg for your buck. For that reason, I unfortunately had no room left to sample one of the many amazing starters or desserts that had been specially designed and homemade for the event. Though from a previous trip a few months earlier I was lucky enough to sample their homemade ice cream. Perks of knowing a chef huh!

I also failed to try any of the enticing vegan beers especially tapped for the fortnight, on account of my Dry January. Watch out February – I’m banking all these urges! The pub deems this special event to be a great success, and have been delighted by the positive response to their menu.

Vegan Fortnight will be resurrected in September and will revert back to their standard (still great!) vegan options as of today. Until then, we’ll keep you posted on the delicious events to see us through the Spring/Summer!

*Dear Rockstone, no one enjoys pronouncing this many ‘V’s in such close succession. But watching people try/avoid was hilarious!